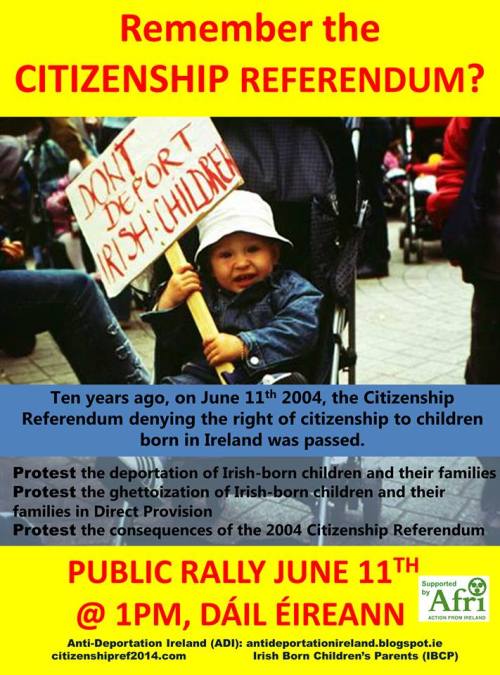 2014 holds two significant anniversaries in the history of the idea of citizenship in modern Ireland. It is the centenary of the foundation of the Irish Citizen Army. It is also the tenth anniversary of the Citizenship Referendum, held ten years ago this week.

If we look at both events together, we can sketch a short history of the idea of Irish citizenship. The Irish Citizen Army vowed to ‘sink all differences of birth, property and creed under the common name of the Irish people’, a position largely in line with the radical republicanism of Wolfe Tone, who advocated putting the ‘common name of Irishman, in the place of the denominations of Protestant, Catholic, and Dissenter’.

The political name of ‘citizen’, in the eyes of the Irish Citizen Army founders, meant a rupture with the subjection to British rule, since, as James Connolly put it, ‘ justice did not exist for us,.. the law instead of protecting the rights of the workers was an open enemy, and … the armed forces of the Crown were unreservedly at the disposal of the enemies of labour’.

This idea of citizenship was inseparable from working class emancipation, the conquest of democratic rights, and was internationalist in outlook. As Connolly again put it: ‘the struggle of Ireland for freedom is part of the worldwide upward movement of the toilers of the earth’, and ‘the emancipation of the working class carries within it the end of all tyranny – national, political and social’.

This idea of citizenship, moreover, is embedded in the Proclamation of the Irish Republic, in its guarantee of ‘religious and civil liberty, equal rights and equal opportunities to all its citizens’, and in its ‘resolve to pursue the happiness and prosperity of the whole nation and of all its parts, cherishing all of the children of the nation equally’. ‘Children of the nation’ means citizens in this context, and not merely children, as the contemporary sentimentalist reading would interpret it.

Following the foundation of the southern Irish State, citizenship was granted to practically anyone born in Ireland. Such citizenship did not, of course, mean full participation in the political life of the new regime. The fact of partition, crucially, meant that a large number of Irish citizens living on the island of Ireland were excluded even from the most basic formal political possibility: that of voting on matters of common interest.

What took hold over a long period, instead, though not without contestation, was the view that ‘the people of Ireland’ could find legitimate democratic expression simply through the electoral decisions of people living in the southern State.

The established myth of 90-odd years of unbroken democracy in the south of Ireland ignores certain uncomfortable facts: the concentration of economic power in the hands of a few; the elimination of political rights for those forced out by the migratory safety valve; the panoply of disciplinary institutions -industrial schools, laundries, psychiatric facilities- trained on the victims of Ireland’s economic system; censorship; the oppression of women; the concentration of media power and the health and education systems in the hands of reactionary elites.

All of these things weaken the image official Ireland projects of an outward-looking young democracy, but they are powerful factors in shaping conventional wisdom on what democracy is, and what citizenship is.

We could sketch the trajectory of the idea of Irish citizenship like this: from membership of a political community committed to the expansion of democratic equality, to membership of a market society committed to meeting the demands of capital and competing against other countries, where myths about Irish national genius –‘Irishness’- bear close resemblance to the family narratives used by corporations to maintain strict hierarchical structures that naturalise distinctions of power and wealth. An imaginary ‘we’, then, forged in the image of the country’s ruling elites. A ‘Celtic Tiger’ showing its predatory prowess among the animal spirits of capitalism.

What is the basis of this ‘we’ in law? This is what the Citizenship Referendum of 2004 sought to establish. It would no longer be enough to be born in Ireland in order to have the same rights and entitlements as anyone else. It would now depend on who your parents were and where they came from.

This entailed constitutionalising racial biological criteria: the introduction of precisely the kind of hierarchies beloved of 19th century racial theorists who developed their ideas in the shadow of the democratic potency of the ‘worldwide upward movement of the toilers of the earth’.

The immediate political climate for the Citizenship Referendum was fostered by government politicians and mass media outlets casting migrants, and particularly migrant women, as devious foreign bodies incubating an evil that would subvert Ireland’s supposedly harmonious social and political order.

‘Citizens’, if they were really concerned with the common good, had to do their voting duty and secure Ireland’s borders against these contaminating infiltrators, and expel those who had managed to make their way in.

It was a long way from the solidarity-based citizenship embodied by the Irish Citizen Army, and, still further back, from the egalitarian principles that informed the Fenian proclamation of 1867, which held that ‘all men (sic) are born with equal rights, and in associating to protect one another and share public burdens, justice demands that such associations should rest upon a basis which maintains equality instead of destroying it.’

The immediate effect of the Citizenship Referendum was to strip certain people of rights and the formal status of citizen. As a consequence, there are thousands of children living and growing up in Ireland in a climate of fear and uncertainty, who have neither the formal rights nor entitlements of their contemporaries, often enduring family splits and living under extreme hardship and degrading conditions.

More broadly, Ireland’s now-formalised racial hierarchy, and the distinction introduced between citizenship and mere residency, all but deactivate the democratic possibilities of the political name of ‘citizen’. Reacting to the re-discovery of the treatment of babies in the Tuam Mother-and-Baby home last week, Fianna Fáil TD Colm Keaveney referred to the “800 bodies of Irish citizens”. After the Citizenship Referendum, it is hard not to interpret such remarks as suggesting, though perhaps indirectly, that there are other children who might be more deserving of such a fate.

To speak of what ‘citizens’ want now is to exclude those who are formally excluded from that category. What is more, since ‘citizenship’ in the Irish context is no longer ever a matter of the active conquest of rights, but rather the State affording certain privileges, there is little difference, in prevailing common sense, between the fact of citizenship and what was previously understood as subjection.

You might ask how it is that nearly 80% of voters – it was only a 60% turn out, so it was only 46.9% of the southern electorate who voted (remember, this is nowhere near all Irish citizens)- could have voted for a thing so destructive of human values such as solidarity and basic equality.

I don’t think this could have been possible were it not for the long unravelling of the concept of citizenship, its recuperation by the south’s ruling elites, and the reduction of democracy to the act of an isolated individual casting a vote in a regime where the economic and the political have been largely separated.

It is also worth remembering that in so far as ‘the people’ spoke on this occasion, this ‘people’ has always spoken in exclusion of large numbers of those it supposedly recognised as its fellow citizens, living just up the road. If equality is important to us, and if justice does not exist for our neighbours and friends, we should see the law, and this ‘people’ with all its cultivated racist and isolationist anxieties, as our open enemy.

One response to “A Very Brief History of Irish Citizenship”