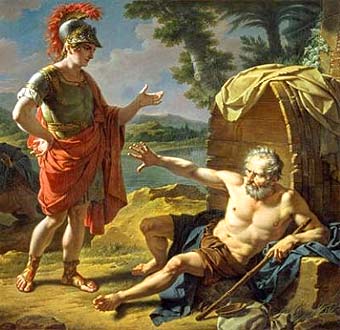 I left a shorter version of this comment, for old times’ sake, on Kathy Sheridan’s article in today’s Irish Times. The article is titled ‘We should stop cribbing about the ‘small stuff’ – and think big.’

Kathy Sheridan speaks of cynicism as if though were a purely negative affair. But why should this be so? Cynicism as a school of philosophy was not simply a matter of declaring that everything sucked. It was concerned with challenging convention and living according to one’s nature, usually from the sidelines. Diogenes of Sinope, AKA Diogenes the Cynic, is reputed to have masturbated in the agora, the central space of the political life of Greek city-states.

When he was reprimanded by affronted citizens for so doing, he said he wished he could extinguish hunger as easily by rubbing his belly. His point, of course, given the ever present hunger in the city’s midst, was that people are happy to leap upon matters of politeness and decorum whilst basic human needs go unaddressed.

Whereas the cynics of old sought to unmask generalised hypocrisy, stupidity and brutality, the prevailing understanding of cynicism these days, particularly when it comes to the public, is barely distinguishable from knee-jerk negativity. In her article, Kathy Sheridan has her sights in particular on the Right2Water campaign.

Apparently, laying claim to a ‘right to change’ Ireland on the basis of ‘equality, justice and democracy’, which is what the campaign now promises, amounts to ‘relentlessly negative rhetoric’, and ‘peddling unrealistic promises’. If laying claim to equality, justice and democracy amount to peddling unrealistic promises, then the ‘heavy responsibility’ Kathy Sheridan speaks about really ought to lie with those who claim such things are not possible.

There is, of course, another meaning of ‘cynical’ in common parlance, which has more to do with the kind of thing the cynics sought to unmask. This is when someone is calculatingly manipulative and dishonest in the service of narrow interests. One might, for instance, describe a studs-up tackle in football as a ‘cynical foul’. That is, the player is motivated by inflicting damage on the opposing player or team, rather than playing the match in keeping with the spirit of the game. One might apply this analogy to the arena of political discussion. Rather than attend to the substance of what people are actually saying, one can -if the intent is merely to smash a political opponent- wilfully misrepresent what is being said. Hence, tens of thousands of people taking to the streets seeking to demonstrate against injustice -with a great many individual variations in their reasons and motives for doing so- can be reduced to mere negativity, or presented as the harebrained babblings of a thoughtless mob, rather than a sign people are prepared to fight for a better and more just and democratic society, and are willing to do so together by demonstrating in public spaces. For democrats, this kind of thing ought to be excellent news. For those whose only response to a vigorous challenge to the ruling order is simply honi soit qui mal y pense, not so much, I guess.

Perhaps Diogenes fits the profile of the ‘moaner and cribber’ Sheridan attacks in her article for not trusting enough in Ireland’s great and good, or in the ‘myriad of choices’ she claims representative democracy provides. If so, she may be pleased to learn that he is also reputed to have committed suicide by holding his breath.