Translation of an article by Manuel Castells, published in La Vanguardia, 21st October 2017, on the Spanish government’s planned suspension of autonomy for Catalonia. 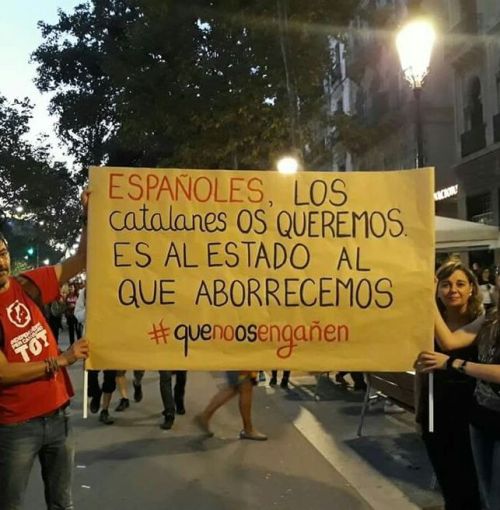 “Spaniards: We Catalans love you. It is the State that we hate”

While you are reading this, the Council of Ministers is finalising details on the intervention on the autonomy of Catalonia via article 155 of the Constitution, prior to passing through the Senate. It is possible that the Parlament will respond with its Unilateral Declaration of Independence. Thus a period of uncertainty opens, the consequences of which are unforeseeable but undoubtedly harmful for public coexistence. The calls for dialogue have come to nothing, because what is at stake is whether or not to accept the possibility of a legal referendum through which Catalans may decide where their institutions ought to belong.

It is useless to invoke constitutional legality when the issue is that a substantial part of the Catalan public does not recognise said constitution. Constitutions cannot nail down social reality. The text that in 1978 obtained a consensus conditioned by de facto powers inherited from the dictatorship has proven incapable of containing the consciousness of new generations of Catalans who grew up in a climate of freedom in which disagreements are resolved democratically. In other democratic places, among them Quebec and Scotland, referendums serve to reconcile law and reality. Three-quarters of Catalans wanted to vote. According to surveys, the No vote against independence would have won. But Spanish nationalist essentialism blocked off democratic exits from a conflict that has been gradually poisoned.

Legally sanctioned police repression has become more problematic for the State since the 1st of October. The images of police violence have scandalised international opinion and have driven European leaders to recommend dialogue, behind the facade of supporting their partner. Tusk views the situation as ‘worrying’, but the EU cannot intervene in the intervention. Even so, the image of Europe as an example of democracy could be affected by its support for authoritarian decisions that have no regard for the political substance of the conflict. There is, moreover, another important limit to the intervention on autonomy: the stance of conditional support adopted by the PSOE. Though in Catalonia the socialists are being reviled for backing the application of article 155, this backing is constrained by their recognition of Catalonia’s reality as a nation. For Rajoy, the support of the PSOE is indispensable due to a strategic concern of Spanish politics that goes beyond the Catalan question. The political project of Spain’s financial and political elites remains a grand coalition that stabilises its domination, that is, the alliance of PP/Ciudadanos with the PSOE. This project was weakened by the reaction of the Socialist grassroots and the re-election of Pedro Sánchez. This opened up the possibility of a left alternative to the Partido Popular government once the PSOE, Podemos and its confluences accepted that their alliance was the indispensable condition for this alternative.

The crisis with Catalonia has allowed Rajoy to drive an almost unbreakable wedge between the PSOE on the one hand, and Podemos, its confluences and the Basque, Catalan and Galician nationalists on the other. Because although Podemos and Els Comuns are not in favour of independence, they are in favour of a legal referendum to resolve the conflict -democratically. A referendum in which Pablo Iglesias says he would campaign for a No vote. This is a starting point that the PSOE cannot accept because it is weighed down by the Spanish nationalism of its past leaders and the resistance of socialist-ruled autonomous regions who fear losing resources if there are concessions to Catalonia. The move works out sweetly for Rajoy: he presents himself as the champion of Spain, isolates Podemos, and rebuilds a constitutional front dominated by the right.

The Government’s dilemma is how to defeat the independence movement in the most bloodless way possible. In one area, it has prosecutors and judges who, by simply applying the constitutional framework in a strict manner, are closing in and punishing what is already being classed as sedition, a grave accusation. Elsewhere, the relocation en masse of business headquarters (nearly a thousand and counting), in reaction to the institutional uncertainty, is gravely damaging the economic credibility of an independent Catalonia. In this context the objective of the Spanish government, and the PSOE, is to force new regional elections, whether by the hand of Puigdemont or the route of article 155. They hope that enough fear and uncertainty has been created for an electoral defeat of the independence movement, which will allow for a Catalan government with which a new arrangement on autonomy can be negotiated, including a future decaffeinated constitutional reform. Thus everything would be restored to normal.

This strategy of gradually wearing down the independence movement, through exhaustion, isolation and repression, has serious obstacles. It continues to ignore that it is a social movement that can become active and spread without leaders and without institutions. On the contrary, the more intervention there is in the institutions, the greater the role played by civil society and the more diverse the forms of resistance. And the more there is perceived repression, the greater the outrage generated and mobilisation activated. Elsewhere, the Parlament assumes itself legitimate and representative, and as such Puigdemont cannot call elections unless it is with the understanding that if a pro-independence majority wins it is to organise a legal referendum. Square one. And even if the Spanish government were to intervene on autonomy and call elections, the fact that they were imposed would mean they would not have the participation of the parties opposed to intervention, that is, Junts pel Sí, the CUP, and Els Comuns, which represent the majority of the electorate. Article 155 is not an exit from the crisis, but rather its deepening and its extension in time, as Catalonia and Spain fracture and neo-falangism resurges. The alternatives are simple: either permanent state of exception in Catalonia, albeit an undeclared one, or dialogue, without preconditions, between Catalan nationalism and Spanish nationalism.