The first English edition of the Communist Manifesto did not begin with ‘A spectre is haunting Europe..’. Rather, as Francis Wheen tells us in his biography of Karl Marx, it began with ‘A frightful hobgoblin stalks through Europe’. The frightful hobgoblin nowadays, according to Stephen Collins’s article in today’s Irish Times, titled ‘A spectre is haunting Europe . . .’ is not communism, however, but mere ‘political chaos’, and it manifests itself in the fact that more than half of the electorate no longer wishes to vote for the traditional parties of rule: Fianna Fáil, Fine Gael, and Labour. ‘Anger and discontent’, he says, ‘may prove more potent forces’ than ‘arguments about the need for political stability’.

In the shadow of the hobgoblin, Collins appears to see no relation between what he calls ‘political stability’, on the one hand, and anger and discontent on the other. Indeed, the maximum expression of the desire for political stability -the draconian conditions imposed by Troika bailouts- appear to him as the acme of good sense.

Collins inveighs against Syriza for its ‘gross mishandling’ of Greece’s affairs. Yet the destructive impact of years of austerity, in the form of skyrocketing unemployment, poverty, and the rise of the Nazi Golden Dawn party, seem to be just one more chapter in the story of ‘traditional European values and the liberal, market-based principles that have served the EU in good stead’.

Now, if by ‘traditional European values’ we mean xenophobia and fascism, and if by ‘liberal, market-based principles’ we mean unbridled capitalist savagery and Carthaginian treaties, Collins does have a point.

Collins points to ‘anti-German emotion’ and the ‘disastrous impact of Marxist ideology’ on people’s lives in Poland. One might easily forget, presented with this take on things, that it was the Soviet Union that defeated the genocidal Nazi forces responsible for the ethnic cleansing, extermination through labour, and death camps that resulted in the deaths of nearly six million people in Poland under German occupation.

Perhaps, by Collins’s lights, the ‘Marxist ideology’ that culminated in universal free health care and free education following the Second World War must have come as an even more dreadful imposition.

Indeed, if we apply Stephen Collins’s criteria for what constitutes a tactical alliance: who else held that it was not Nazism, but rather the forces of communism, that constituted the greatest threat to the future of Europe? Well, Hitler, for one. 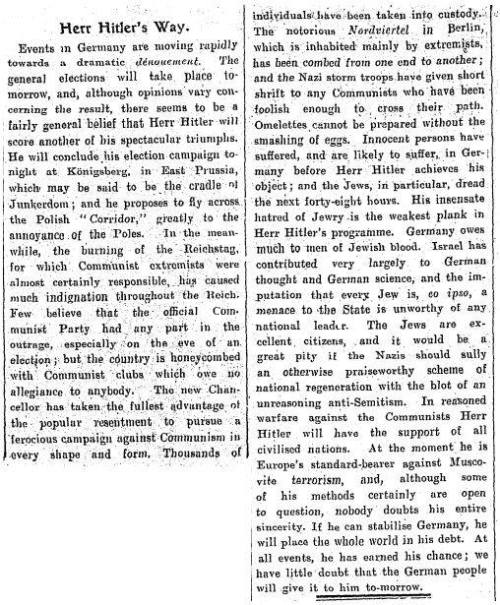 But also the Irish Times, circa 1933, when they saw Hitler as ‘Europe’s standard-bearer against Muscovite terrorism’. Some alliances endure longer than others, it seems. A seasoned observer might declare this a foolish consistency, stalking little-minded hobgoblins.