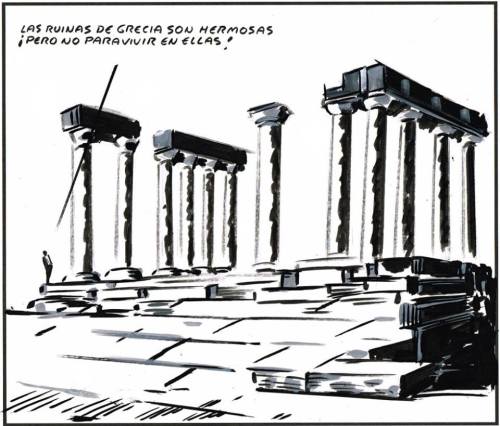 So, the deal taking shape means the Syriza government in Greece has now welcomed its former ‘partners’ as its rightful overlords.

The Syriza leadership, such as it is, proposes to take a courageous and resounding No vote against austerity, delivered by a people in revolt, and cast it to one side. Its credibility has begun to nosedive, and its plans are likely to meet with fiercely hostile resistance. When it put the proposals of its ‘partners’ to a referendum last week, the erstwhile Finance Minister Yanis Varoufakis said –in the language of economics- that the government was merely the agent, but that the Greek people were the principal. Varoufakis has made way, and the real principal, according to Syriza today, is the Troika-that-dare-not-speak-its-name.

It was never clear to me whether the public Europhilia of prominent voices in the Greek government was a rhetorical ploy, or whether it rested upon deeper convictions about what the European Union has to offer. Perhaps this public stance masked a private awareness of the suffocating straitjacket of currency union and the need to get out. Then again, these people genuinely believed that the EU institutions and the IMF would be amenable to so-called partnership on a progressive solution to Greece’s crisis.

Maybe they genuinely believed and that a persuasive counter-narrative to EU neoliberalism would bear fruit, by dint of sheer reasonableness. Maybe they were counting on greater solidarity from other Eurozone member states. I would prefer to think they knew what was happening all along, but in the cold light of day, with each new revelation, it is hard to shake off the feeling that they were labouring under a glaring naïveté.

The EU institutions, when they conduct negotiations, operate based on consensus. But this is a consensus that tends in one direction only. It is a consensus because EU policy elites already agree on the broad shape of things anyway. This consensus tend in the direction of greater ‘competitiveness’, that is, greater impoverishment of Europe’s working class, the continued dismantling of the welfare state, further privatisations, etcetera. From the point of view of those involved in the negotiations, this is all to the good.

Some states will, of course, get leeway on this and that, but always provided that it paves the way towards greater ‘competitiveness’. Any reversal of the overall tendency is unthinkable, out of the question, absurd. And as Dardot and Laval stress in The New Way of The World, sweet reason will get you nowhere:

To go on believing that neo-liberalism can be reduced to a mere ‘ideology’, a ‘belief’, a ‘mind set’ which the objective facts, duly registered, would be sufficient to dissolve, just as the sun dispels morning clouds, is in fact to mistake the enemy and condemn oneself to impotence. Neo-liberalism is a system of norms now profoundly inscribed in government practices, institutional policies and managerial styles.

Syriza, it seems, begged to differ. And as negotiations went on, ‘beg’ appeared to become the operative word. Those who voted OXI, on the other hand, were too proud to beg. And to give the Greeks what they were looking for would mean the entire European political establishment forswearing its most cherished beliefs. It would mean exposing itself as weak and susceptible to pressure. But it has been exposed, by the OXI vote, in a way that never has happened before. Never has the EU appeared so bereft of any kind of democratic inclination. Never have its leaders appeared so venal and vindictive, so ideologically hidebound. They could hardly let the Greeks away with that.
Syriza as a political force is going to sustain heavy damage as a result of this. But the damage sustained by the EU institutions is likely far greater than they would be prepared to let on.

It is a commonplace to point out that there is no European demos. What keeps such a thing from emerging is the way the EU’s institutional architecture, its normative framework, maintains a strong sense of national identity in member states, resting on this compulsion to compete. But when the oppression perpetrated by the EU appears far and wide as a collective enterprise, as something exacted by those at the top, regardless of their national affiliation, then it is harder to contain the sense felt by all those under attack that they have something in common. I realise this is a wildly optimistic extrapolation. But nonetheless it remains possible. If Greece is compelled to leave the euro -as Schauble and others appear to desire- the damage to the currency will be fatal. Maintaining credibility will become more fraught than ever. So, even as some doors close, others open.

Greece these days is turning into a canvas upon which people elsewhere can envision the fundamental conflicts in their own countries. In Age of Extremes, Eric Hobsbawm talks about how Spain in the Civil War period was the global symbol for the conflict between the ‘fundamental political issues of the time: on the one side, democracy and social revolution, Spain being the only country in Europe where it was ready to erupt; on the other, a uniquely uncompromising camp of counter-revolution or reaction’.

Something like that is happening with Greece, albeit not on the same scale of carnage. The attempted humiliation of the Greek populace -and now the apparent humiliation and ignominy of its government- is beyond used as a warning fable by forces of reaction across Europe: do you see what happens when you lift your head above the parapet?

Here in Ireland, the Syriza government, the Greek people more generally –and you, by extension, for thinking they could make the case for a more democratic Europe- are “clowns”, “eejits”, and “lunatics”, according to those in the know (the words come from senior cabinet ministers, as reported in the Sunday Business Post, and from Michael O’Leary).

Accept reality, embrace competitiveness, pull on the green jersey, bow to the inevitable, and we might throw you a bone the odd time. The objective, of course, is to make any form of resistance futile. Whatever one’s criticism of Syriza from outside the country -and plenty can certainly be made- their difficulty should not be allowed to become the opportunity for the reactionary hordes in Fine Gael and Labour, for example, to make hay out of Greece’s misery. Solidarity with Greece means standing up to the curs at home. It means striving to prevent normalised resignation taking hold altogether. It means extending last Sunday’s OXI into every recess. Neoliberal rule in Europe means there is no room for imagining a demos split into principal and agent: it must be both. We are free to do otherwise, of course. But ‘otherwise’ in this case means, quite simply, embracing the darkness.

6 responses to “Principals and Agents”