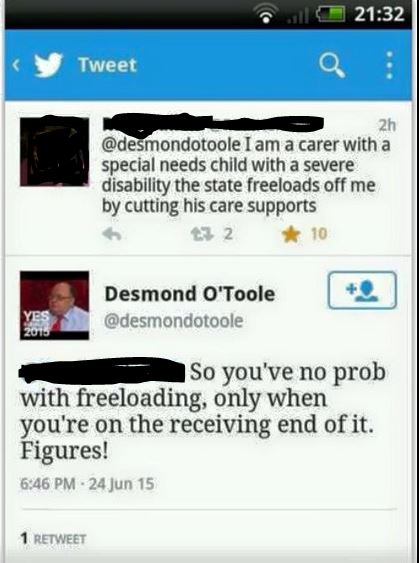 One of the key claims made about the introduction of water charges in Ireland was that it would improve conservation habits. There were attempts to make the public believe that the fundamental problem of water conservation arose from wasteful habits on the part of households. It was people leaving the taps on overnight, not a scandalously underfunded infrastructure with huge leaks, that was at the heart of the matter.

As the infamous PR strategy slide from Irish Water put it, people had to cease to think of themselves as citizens, as the bearers of a right to drink water, and think as consumers instead. Consumers, by their nature, do not look out for the rights of others, but care simply that they themselves might continue to consume.

Hence the solution to the water conservation problem hinged on strengthening our inner homo economicus, the ceaselessly calculating individual who weighs up every action in terms of its economic benefit, regardless of the wider social implications.

Some months back I discussed with a friend the reasons for water charges becoming the straw that broke the camel’s back, as far as public protest in Ireland was concerned. I ventured that it was not merely the additional financial burden -which is of course huge, since water charges are effectively a highly regressive tax that hit those with the least the hardest- but the prospect of the discipline that this would impose, the prospect of ceaseless worry in an already straitened household about money going, quite literally, down the drain.

Not much attention has been paid to this side of things in the media, since the dominant frame is that of the bill-paying consumer, and not the person engaged in the endless everyday task of keeping a home up and running (who is usually a woman).

The supposedly wasteful habits of the public are, of course, an alibi for the introduction of water meters, which is the key piece of infrastructure required for the privatisation of the water system.

There is a neat congruence here between this image of the man who leaves his taps on all night and the broader image of a wasteful and profligate populace that must assume its guilt and pay its penance.

There is a sleight-of-hand at work here worth mentioning. It is well known that the public water infrastructure was leaking all over the place (it is less well known that household consumption accounts for a small proportion of the leaks). But elements of this public water infrastructure have now been privatised de facto according to Irish Water’s charging strategy: if the leak is on your dwelling, it is you and you alone who must pay for it. They are now your pipes.

Water charges, then, are not only a means to privatisation: they are also a means to deepening one’s sense of oneself as a private, utility-maximising, cost-benefit-calculating, rational isolated individual or household. As Margaret Thatcher put it: economics are the method: the object is to change the soul. And once your soul is altered, such that water and other public goods appear before your eyes as commodities, your mind is addled by free-market ideology, and you begin to see people who lay claim to water as a genuine public good to be shared as equitably as possible, those who see the right to water as inseparable from a host of other rights and entitlements that form the basis for a decent life in an equal society, as freeloaders.

Save your soul from turning into a neoliberal turd: don’t pay the water charges.

2 responses to “Water Charges, Homo Economicus and the Freeloaders”