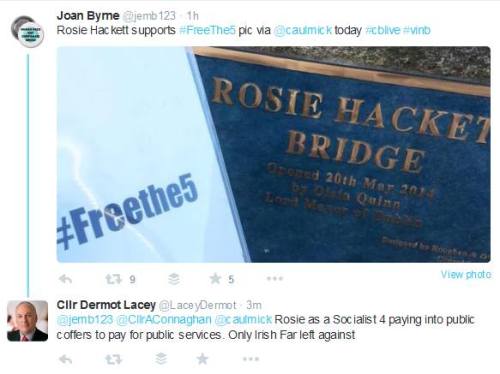 Most people who oppose water charges have no difficulty paying taxes, or paying into public coffers for public services, as voluble Labour Party councillor Dermot Lacey puts it above. What is habitually ignored, by those who classify this position as ‘anti-tax’, or the product of an unholy alliance of ‘Tea Party and Trots’, as one Labour deputy put it in the Dáil, is the particular context in which the water charges, and prior to this the household tax, was imposed.

These things were not imposed as part of a shift towards a more progressive tax model. They were imposed as part of a shift away from progressive model of taxation and towards a model that relies far more heavily on indirect taxes and user fees. They were imposed in the context of tens of billions of euro in public money being shovelled into the coffers of speculators, in order to maintain the viability of a parasitical financial sector.

The simple fact is that none of the social democratic conquests that the “real socialists” celebrate could ever have been achieved without militant resistance and activism, and the idea that there is no need for any such resistance and activism at the current moment is, like this whole attitude to the water charges protesters, anti-socialist, pro-capitalist and pro-neoliberal.

Perhaps the biggest irony here lies in the fact that the socialist tradition has always been concerned with the self-conscious history of human beings, and against obscurantism. Yet this “real socialist” denunciation of the “anti-tax” hordes fails to engage in even the minimum examination of the political moment, or the slightest use of a sociological imagination, preferring headlong attack against a crude caricature instead. It is pathetic.