Diarmuid O’Flynn: A crusade against the banks

This is a translation of an article published in El País today, 12th May 2014, by Walter Oppenheimer, profiling MEP candidate Diarmuid O’Flynn. 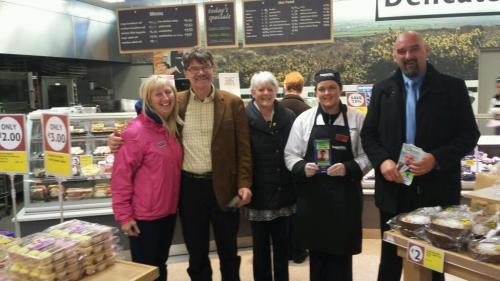 A crusade against the banks

Independent Diarmuid O’Flynn wants to take his campaign against bank bailouts to the EU
“And what brings you to the most corrupt country in Europe: business or tourism?”, he remarks as soon as the car starts, after nothing more than the polite “good morning” and the destination address. The level of sarcasm in the sentence, and the way it comes out, are striking, even by the usually high levels of scepticism of a taxi driver. Even for an Irish taxi driver.

He is outraged about the resignation of the minister for Justice, Alan Shatter. Not because he has resigned, but because he took months to go, and though he is leaving the Government, he is staying in the Parliament. “He doesn’t resign his pay packet”, he laments. Despite the rabble-rousing behind his comments, it symbolises the hatred and contempt that the Irish have for their political class.

The traditional big party, Fianna Fáil, is still doing penance for the sins of having ruled during the years of the fattened calves, and having fed the property boom and financial crash that followed, returning the Irish to the old traditions of poverty and emigration. Fine Gael and the Labour Party, who took up the reins of Government after a landslide in the general elections of 2011, are now the object of the same popular discredit.

In this political atmosphere there are alternatives germinating, such as the one represented by Diarmuid O’Flynn, a 61 year old sports journalist who for the past three years has been demonstrating every Sunday alongside a fistful of citizens, demanding that bank bondholders pay back the aid received by the State due to the financial crisis. Since March of 2011, O’Flynn walks through the streets of Ballyhea, a village of little more than 1,000 inhabitants 60 kilometres or so north of Cork, Ireland’s second city, with a banner that reads “Ballyhea says no”. He now wants to take his protest to the heart of Europe and has put himself forward as an independent candidate in the European elections.

The polls give him a respectable 7%, not far off the 10% that could give him the fourth seat for the Ireland South constituency. He dismisses the polls and declares he is absolutely convinced he will win despite the fact he has neither the money nor the people nor the electoral machinery of the big parties. He only has his faith, a handful of faithful supporters with whom he goes asking for votes door to door and in markets and shopping centres, and the hope that a certain fame as a sports journalist specialising in rugby and a Gaelic sport similar to hockey called hurling give him the extra popularity needed to get the attention of voters.

O’Flynn is 61 years old but with the energy of a thirtysomething. He started out as a topographer, then became an engineer and by chance he happened upon sports journalism during years he spent living as an emigrant in New York. “A few years ago I was a normal ordinary person. I hardly worried about Europe or the financial system until this crisis came along. When the previous government decided to issue a guarantee to the banking sector, I became alarmed. I began to read and I realised what that measure meant. I wrote to each and every one of the members of Parliament so that they would vote against it because to me it looked like madness”, he explains as we head in his Volkswagen Passat on the way to Limerick.

He is one of those who voted in the present Government because he believed “what they were saying when they were in opposition”. He soon felt betrayed and decided to take action. First, with the weekly protest in Ballyhea and in neighbouring Charleville. Now, as candidate for MEP. On Friday afternoon he met with the hard core of his campaign team in his pretty house in the middle of the countryside. His wife, a primary school principal, made coffee and tea and cut the pastries of apple and chocolate that someone brought.

His team fits into a car. It comprises him, a hyperactive schoolteacher called Fiona and a young businessman, Robert. Then another two friends get in. In scarcely two hours they plan the two remaining weeks of the campaign until the day of the elections. His constituency takes up the southern half of Ireland and they barely have enough money to print campaign leaflets and a couple of posters they bring with them when they go to hand out the leaflets.

Saturday afternoon is the turn of Limerick, the country’s third city. Half a dozen volunteers have arranged to meet him first thing in the morning in a café. In the Milk Market, on a grey and rainy morning, many people give them a wide berth: the key is to immediately use the word “independent”, so that they don’t confuse them with the traditional parties and accept the pamphlet they offer them. They ask the most disenchanted to hang on to the leaflet, to read it and then decide if they are going to vote or not.

The leaflet outlines O’Flynn’s electoral programme: it denounces the €70 billion cost of the bank bailout, including a €28bn promissory note for bondholders, which the candidate wants destroyed; it calls for the financial transaction tax to be applied throughout the entire EU; it denounces the upcoming trade agreement as a tool in the service of the big corporations; it opposes global financial deregulation; it highlights the multinationals that scarcely pay taxes; the viability of the Euro for countries such as Ireland is questioned.

O’Flynn does not reject the European Union, but he believes it is not working and has to be reinvented. “I hate nationalisms and I cannot bear it when people say that Ireland is the best little country in the world. When did that competition happen? When did we win it?”, he says, with irony. But he believes in the nation-State and questions the ceding of sovereignty to the European Union. He does not believe in the institutions created at a European level, of which only one (the European Parliament) is elected and in the rest those in control are unelected officials (the European Commission, Council, Court of Auditors, Court of Justice, and Central Bank). He believes the first thing that must be done is “reverse in an orderly way out of the Euro”.

He outlines his programme in a very long poem of eight pages that he has written in his spare time and in which he satirises with examples such as the following: Pythagoras’s Theorem, 24 words; Lord’s Prayer, 66 words; Archimedes’s Principle, 67 words; Ten Commandments, 179 words; Lincoln’s Gettysburg Address, 286 words; Proclamation of the Republic of Ireland, 475 words; United States Declaration of Independence, 1,300 words; EU Regulation Number 159/87 establishing the required quality for cabbage, Brussels sprouts, sticks of celery, spinach and plums, 5,091 words.

What moves Diarmuid O’Flynn is his faith in people. He worked a long year in Libya and believes that the protest that culminated in the overthrow of Muammar Gaddafi is an example to follow. “People knew what was they were risking”, he explains in admiration. He is risking a lot less. Perhaps they will laugh at him. But that did not stop his protest in Ballyhea, even though it was rare for more than twenty people to go out demonstrating. “I never cared that people might think I was making a fool of myself”, he maintains. Perhaps for that reason he has no doubt that he will get to the European Parliament. “What keeps us going is that we know we are right”, he proclaims. It is clear O’Flynn is among those who believe that faith can move mountains.