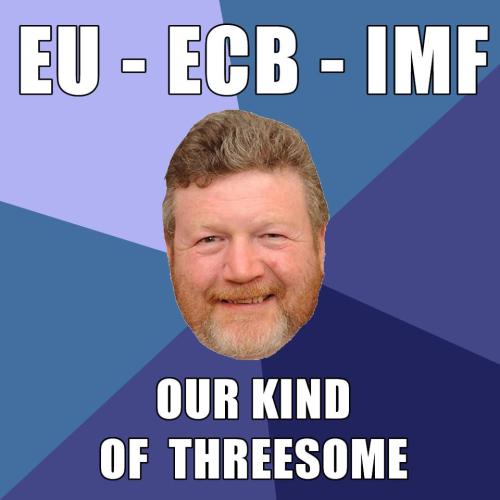 Who the fuck do these people think they are?

I am tired of running through the forever incomplete and abridged litany of things they have done, and things they plan on doing, but let’s have a quick and incomplete recap: they funnelled billions of euro in public money to wealthy bondholders. They introduced a regressive home tax to pay for it, and they have cut spending in education, in health, in welfare services, in order to pay for it. They have slashed wages in the public sector in order to drive wages down further across the board. They have introduced legislation to provide tax breaks for international financiers to send their children to private schools whilst cutting special needs budgets. They have threatened to cut off water to people’s homes as a disciplinary measure. They have cut a million hours in home help. They have staged sham constituent assemblies behind closed doors as a pathetic fig leaf for their anti-democratic programme. They have set about the de facto abolition of paid labour through the JobBridge programme.

Among many, many other things.

Now it turns out that James Reilly –who had a big fuck-off sign at the end of my road in advance of the last election that read “Vote James Reilly because the North County needs a Minister in the Dáil”, or words very similar to that, thus admitting in public that he was prepared to abuse his position in the special interests of people who would vote for him- has declared he does not think a mental health organisation for young people should be publishing articles about threesomes because he doesn’t think it “an appropriate use of public money”.

You don’t need a special website to tell you why this is happening. Fine Gael are ideologically committed to the stripping back of the welfare state, and the continued privatisation of health and education services, because these are the sort of things that make the most important members of its constituency rich. But not only are they ideologically committed to it: embarking on such a path holds the prospect of succulent cash rewards once political tenure has ended.

And yet, it needs votes from people likely to be impoverished by such measures. So in order to cover for the fact that it has no intention of doing anything to protect the social, economic and labour rights of people living in Ireland, but rather seeks to attack them, to drive down wages and remove public services, it sets about attacking ‘waste’ and ‘inefficiency’ in the public sector, trumpeting its power to subject public sector workers and public entities to the logic of profit and private business efficiency.

At the same time, it lashes out, through a compliant media, at potential sources of dissent: republicans are demonised, household tax campaigners are vilified, social media users are presented as a seething vituperative rabble. Irish charities and other quasi-public bodies have long been meek in their criticisms of government policy, for fear of punishment in the form of withdrawal of funding.

Picking a target like SpunOut.ie, a body that provides very worthwhile services to young people, so that they can make autonomous decisions about how to cope with depression, self-harm and suicide – phenomena that are being exacerbated by present government policy- is part and parcel of their kleptocratic bullying. It is part of their war on any vestige of a democratic society.