OK, we support the miners, but… public servants?


Translation of an article by Isaac Rosa, published in Zona Crítica, 18th July.
OK, we support the miners, but… public servants?

(‘Burnt workers’ – ‘quemado’ also means to be at the end of one’s tether (via.))
Last week there were many of us chanting "I am a miner" to be part of the struggle of those who were marching to Madrid from the mining regions. This week many of us are supporting the protest of the public servants. Perhaps we are not so great in number as those of us who applauded the participants in the ‘black march’, and this would not come as a surprise, since whereas for the miners it is admiration and affection accumulated over centuries, it is, in equal measure in the case of the public servants, vilification and caricature, also over centuries. If in the popular imagination miners are the heroes of the working class, in that same imagination public servants tend to appear as a lazy, parasitic and privileged grouping, providing joke material in abundance and an easy dartboard for the resentment of the most exploited workers.

( Workers cut off C/Serrano, one of the main thoroughfares in Madrid, for the fifth day running. via.) As you will understand, I am not going to waste a minute in debunking this negative image. I will not do it for various reasons: because we have the whole year to point out shortcomings and propose changes in the public service, and to do it in the moment when they are under attack is to pander to those doing the attacking. And because regardless of what I.say, there will always be someone prepared to reject most of it and recount a long list of fouls that he has witnessed committed by public servants. That among public servants there are indolent, disloyal and self-seeking attitudes, no doubt: as there are in any corner of a country like this, where the ex-president of the employers’ organisation goes around hiding money in Switzerland after driving numerous businesses to ruin. And I might add: it would be natural for indolent, disloyal and self-seeking behaviours to become widespread, since you can hardly expect much dedication, commitment and effort from those who get abused time and again 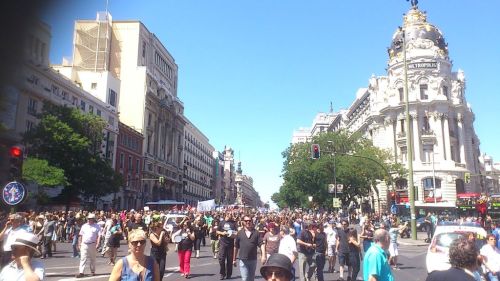 (via)
The important thing, despite the fact that these anti-public servant stereotypes are so deeply rooted in the popular imagination, is that currently there is great solidarity with public workers. No doubt greater than might have been expected by the Government, who perhaps were counting on the cuts imposed on the "privileged" public servants being accepted and even applauded by those who are having the hardest time of it, but that is not how it is turning out. Once again, as happened with the miners, the street becomes a reclaimed space where intense encounters and re-encounters take place, marked by gestures of collective emotion: once again we see embraced, spontaneous shows of support, beeping of horns accompanying the blocking of traffic, and even police who let slip signs of sympathy, public servants themselves at the end of the day. On social networks too the extraordinary messages and campaigns multiply, such as the "thank you public servants" that is so widespread, and which at a different time would have sounded like a joke to plenty of those who now display it. That we should greet the miners with embraces makes sense, it surprises no-one, because of that heroic status they have maintained for centuries. But that we should show affection for public servants is something else, the Government must think. They were trusting that in times of scarcity we would not be moved by the the axe being taken to those who enjoy so many privileges: job security, discretionary days, longevity pay, social assistance, decent working hours and on the whole less abusive conditions than in the private sector..That is, legitimate labour rights to which all of us ought to aspire, and which in the new language of these times are turned into privileges that must be eliminated in order to drive us all equally downward. I can imagine the discomfort of the president and his ministers: "If the unemployed, the precarious, the adjusted and the dispossessed are supporting the privileged, we are done for". Yesterday we were all miners, today we are all public servants, in the same way that we are unemployed people (whom the Government cruelly uses to enrage), we are all carers for dependants (whose hopeful "right of dependancy" has vanished as soon as the good times began to end), and tomorrow if needed we will all be pensioners (since pensions are not safe from the next round of cuts). Join up the dots and you will find the common denominator of all those groups affected by the crisis and the policies of anti-crisis: it is not that of being citzens, since neither the crisis nor the policies of cutbacks affect all citizens equally (there are banker citizens, executive citizens, and citizens with great wealth). What unites all those groups being sacrificed is that they are workers. We can understand it better this way: mine workers, public workers, unemployed workers, workers who care for dependants, retired workers.
It may seem obvious at this stage, but miners and public servants take the streets and remind us of it once again: that the so-called crisis is a looting of workers on a historic scale : a pillaging of our labour, our salaries, our rights, our public services, a transfer of wealth from the emptying pockets of the working class to the armour-plated accounts of the champions of the crisis, those who pay no price for their mistakes and suffer no cutbacks. That is what the so-called crisis consists of, and only when we are fully aware that it is not only a matter of outraged citizens but of workers in struggle, will we be able to put a stop to this looting.