The Greek elections and the change of political cycle in Europe

Below is a translation of a recent (unattributed) piece from Madrilonia.

The Greek elections and the change of political cycle in Europe 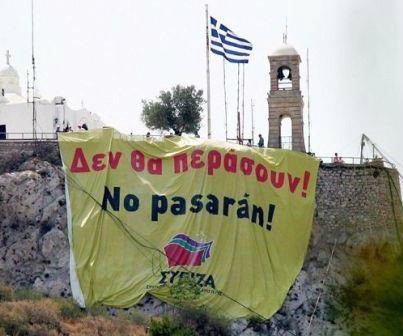 The change of cycle in Greece, and in Europe, has already begun. Despite Syriza’s narrow defeat last Sunday, the fact that a supposedly minor party could, in less than a year, manage to obtain nearly 30% of the votes, double that of the social democratic party in power, PASOK, tells us something about the strength of the social mobilisation that has carried this coalition forward. Despite the vertiginous speed with which novel and important positions such as those of Syriza have spread, they still need a certain amount of time before they become those of the majority in Greece. In fact, as is the case with 15M, some of the matters, the more strategic ones, placed on the table by Syriza call for ways of practising politics and interpretative schemas that will be unavoidable for any kind of contestation that might be articulated in Europe in the coming years. This is the key revealed in the Greek elections: the proposals from Syriza for exiting the crisis, especially those that refer to the need for a confrontation with the financial sector and its European political delegates, in consonance with the slogan “we do not owe, we will not pay” from the indignados of Syntagma Square, will be the basis for a new common sense, in opposition to the complete submission to the diktats of financial actors on the part of the different European versions of bipartisanism.

The victory of New Democracy and this party’s acceptance, alongside PASOK, of the brutal bailout conditions, is the realisation of its defeat in the short/médium term. The conditions for toughening privatisations, cutbacks and tax rises –not for the richest- imposed by the Troika (ECB, EU, IMF) simply cannot be managed from the national level and will continue to generate lines of conflict that place the institutions of the EU largely controlled by Merkel, on the one side, in confrontation with the Greek population on the other. For a long time we have been used to hearing that the monumental mobilisations in Greece had served no purpose. This was true to an extent precisely because they were enclosed within the narrow space of Greek national sovereignty and they had not reached the point where they addressed the interests of the powers that operate above this narrow sovereignty. Now we can say that confrontation at a European level has been opened up in Greece, and once opened there, it is also potentially opened in the whole content. It is easy to observe the symptoms of this new political phase. First, the European Union has had to intervene directly in the electoral campaign of a member state, causing its appearance of technical neutrality to disappear. Second, the electoral debate centred on the conditions imposed on Greece by the EU: even New Democracy promised that it would try to renegotiate the austerity Memorandum that they themselves signed. And lastly, in a large part of Europe, Syriza’s gamble has been perceived as the opening up of the type of conflict that can truly change the situation of the 99% of the population: the first step towards questioning borders as lines of containment for social costs and political conflicts in the EU.

Within the EU, national borders have served to turn the hole in the balance sheets of European banks into a debt crisis of member states. The mechanism has been as follows: the banks have needed public funding, which has driven up the debt levels of member states, which in turn have found it progressively difficult to fund themselves through the markets and as as an end result have had to apply for an EU bailout to obtain funding. This entire mechanism has been, and remains, the way capital gets injected into European banks: directly via assistance from countries to banks; through money received from the ECB at 1% which is then loaned by the banks to countries at a higher interest rate (between 4% and 7%); via bailouts such as the €100bn to Spain, which will be destined for the cajas whilst State is burdened with the repayment guarantee and the debt. Risk premiums, debt and bailouts are all part of the same mechanism of the looting of the 99% to the benefit of the 1%.

The problem of the EU is nothing other than the lack of democracy. The sovereignty of each country in separation is near inexistent, and those who run the EU have managed to ensure that the crisis has been maintained as national problems of Greece, Portugal, Ireland, Italy or Spain that the EU can ‘help’ to resolve, always provided that the conditions linked to adjustment and austerity are abided by. Let us remember that thanks to the containment of the crisis within the peripheral countries, Germany is managing to fund itself very cheaply and its firms are taking advantage of privatisations in order to acquire important assets such as the Greek telecoms company or Athens airport. It is also worth pointing out that none of the countries bailed out has improved its situation, despite having carried out the sacrifices required: the risk premiums have not come down and the national debts continue to grow.

One only has to look at the relieved reactions of all the European chiefs to the pyrrhic victory of their colleagues and the brutal campaign of fear launched by the EU to know that Syriza has touched a central nerve by presenting the crisis as a political problem that is resolvable via a democratic restructuring of the continent’s politics and not as just one more economic inevitability to which one can only consent and be resigned. It falls to all of us Europeans to draw conclusions from this, but especially Spanish and Italians, who now find ourselves in the centre of the same model for generating profits for a few at the cost of the majority which, a year ago, ended up forcing bankruptcy on the Greek State and the imposition of that brutal mechanism of political domination and looting known as the bailout. In Spain we are not going to have a single big bailout; rather it will be carried out in stages, with successive offsetting, cutbacks and privatisations, each time on a greater scale. But this, even though there is still no party even remotely similar to Syriza, should not hide the similarities with the political situation in Greece.

It is no coincidence that all the Spanish media, with few exceptions, either hid or lied about Syriza’s central proposal: non-payment within the Euro. It is important to point out that once an audit were conducted, one could detect which debt is illegitimate –acquired fraudulently, in the benefit of private interests or to the harm of the majority –so that it did not have to be paid. This is such a powerful position because it demonstrates that European neoliberal policies are not something inevitable. In fact, with the Greek elections, the alarms went off in the EU: the conflict might cross borders and become a European problem, which is exactly what it is. The Rajoy government is an intermediary as was that of Zapatero. Bailouts and the accompanying rise in debt are already here. It is time to make the leap onto the European scale of the crisis, and also, therefore, of the conflict. We can take note of what has happened: the strategic points are already formulated and it is our turn, here too, to take advantage of the breach that has been opened in Greece and join forces, through a democratic audit, to bring about a declaration of the non-payment of illegitimate debt that puts an end to the imposition of the interests of the 1% onto the rest of us. How can that be done? This is what we have to think about among the many brains connected through networks and the squares.