Back To The Future

I don’t have much time for reading these days. But this book – Incongruencias, una reflexión autobiográfica, (Incongruences, an autobiographical reflection) by Francisco Pereña, looks like it’s worth checking out. A review of it appeared in yesterday’s Público, by sociologist José Luis De Zárraga, which is interesting enough in its own right, hence the translation below.

Memory to recover the future

“This book is not an autobiography”, warns the author in his first line. What is autobiographical for him amounts to “linking reflection to the symptomatic condition of a place and an era”. Incongruencies is an exercise of memory. It responds to the ‘imperative of memory’ whose necessity Adorno identified more than half a century ago and which remains so indispensable today. Memory is not mere recollection, but updating the past, not something passive, but the act of bringing the past into the present. Pereña brings to us in the present a past whose symptomatic value is being smeared and wiped out. 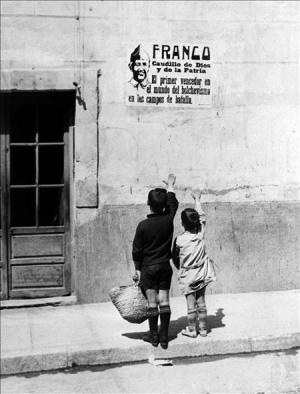 United, since he was a child, by a secret bond to the losers, despite being born in a rural conservative environment and growing up in a seminary, Pereña reflects on the experience of the Spanish person who managed to subtract his conscience from the brutalisation of the years of Francoism: the experience of poverty, of repression, of fear and forced obedience, of the indignity that saturated all social life; of the experience of the anti-Francoist struggle, a moral struggle fraught with desperation; also of prison and torture. Then, with the dictator dead in his bed, the experience of the Transition which, rather than substituting the arbitrariness and the brutalities of the dictatorship with democratic forms, ensured the necessary social demobilisation and depoliticisation so that the system of domination continued: the pragmatism of the governments of Felipe González; the return of Francoism and the right-wing Government free of hang-ups, with Aznar; the accession of Zapatero to power, which set in train the fear that all the compromises of the Transition might be placed at risk; his immediate delegitimisation and harassment…

An experience where the identity of the author is not essential (albeit indispensable, since there has to be a subject so that there is experience), “the personal is of no importance (here)”, says the author. But experience in which many Spanish people can recognise themselves, not only those of his generation, but of those that followed, because present-day Spain retains the imprints of material, ideological and moral misery on which it has been built. Spain has never recovered from the annihilation of social awareness perpetrated by Francoism, from the fear and submission to power that it implanted in people’s consciousness. At the foundations of its edifices, which seemed so luminous to many, there remain the debris, the rubbish, and worst of all, the graveyard. The corpses buried in the ditches are a metaphor for our country.

Without recounting anything extraordinary, merely the small things of a life like others, the potency of the evocations in his book is such that it knocks the reader back, and his reflection is so steely that it cuts short the ideological imposture that would make them bearable.

Determined to live, despite everything, the author speaks of a life of uprooting, of resistance, at the margins and, we could say, underground: but not of course of resignation but of obstinate resistance, since the least that a person who maintains dignity can do is to oppose, even when there is no hope and even if it is only with a gesture. To oppose oppressors, oppose sects, oppose Pharisees. Wherever there is political, ideological, institutional, academic power, there is always accommodation and abjection.

In this autobiographical reflection, Pereña also runs through, in synthesis, the theoretical work of his books, critical elucidation of concepts: guilt and drive, forgetting and ignorance, repression and denial, interpretation and clinic, violence and cruelty, solitude and belonging, repetition and difference….Concepts where what is at stake is an idea of the subject and of the psychic conflict in which the latter is irreducible and constitutive of the former, a moral dimension without which the subject would not exist.

The author is a psychoanalyst and throughout the book he returns frequently to psychoanalytic discourse, more than as an instrument or a methodology, as a source of inspiration. Compassion is a key concept in his work. Pereña recovers the Greek idea of compassion and defines the clinic of the subject as a “clinic of compassion”. The clinic attends to the real vulnerability of the subject and it is not possible without sensitivity to its suffering, whether ill, oppressed, poor or excluded. Reflecting from the margin, he criticises certain therapeutical practices, a degradation of the clinic, which move amid naked greed and theoretical abstraction, tricking the patients. There would be a need to recover the critical heritage of Freud, confiscated by the dogmatic machinery that has marketised psychoanalysis.

Analysing a capitalism that today is only barbarism and of which rejection is a basic moral statement, the critical heritage of Marx must be recovered. Marx as a critic, not as a legislator of the world, is indispensable, not only for analysing the system of exploitation, but also for understanding what it does to the subject and to the social bond.

It ends, in the book’s epilogue, back at the present moment, at the now of the revolts against the tyrants in the Arab countries and, in the West in crisis, of the outraged mobilisations of young people against the barbarism of the system, which express emancipatory desire and a will to refuse. This is reading for this time of defeat, when memory is indispensible for rejecting an order that presents itself as eternal, and to discover in the present, in the manner of Benjamin, the ‘unpredictable revolutionary opportunity’.