I posted a piece a few months back, a translation that demonstrated that a very high percentage of saints came from the upper classes of the society in which they lived. Thus a moralism fostered with the aid of the Church endures, and it extends beyond the direct contemporary influence of the Church hierarchy, which of course is still considerable. As Luis García Montero shows below with regard to Spain, quasi-religious moralism is a powerful feature of the present austerity regime. And it exists to make us feel guilty about democracy. We all partied, said former Irish Finance Minister Brian Lenihan days after formalising the First Irish Troika Bailout.
What is often forgotten is that Lenihan was not pointing an accusatory finger at the population for squandering its security by taking out loans for 30 foot gold-plated statues of badgers to go with the decking. In fact, he was referring to the other main political parties, who had sought election amid promises for more teachers and nurses. The hedonism to be denounced at the dawning of Ireland’s post-sovereign era the belief that the Irish people should entertain crazy dreams about public services at a standard somewhere near that of other -is ‘other’ really the right word here?- Western European democracies, that they should have access to the things that in other places are considered a normal component of democratic life.
And as the austerity regime tightens, in Ireland as in Spain, the collective memory of accusations of sinfulness will be called forth by self-important grim-faced turds like Brian Hayes escorting to all sorts of cod-theological justifications, including the exaltation of charitable giving, as a means of making you forget the notion -if it ever crossed your mind in the first place, and let’s face it, for many people in Ireland it certainly has not- that democracy has anything to do with decent public services, free education, free healthcare, free public transport or any of that sinful, sinful behaviour that John Charles McQuaid fought so valiantly to keep out of Ireland.

The scissors of the moralist have been sharpened. Historically their work has always consisted of cutting out ideas, joys and sins of other people. Now they prove effective in cutting back social rights and public spending. Any slasher needs to confuse himself, if possible, with the role of moralist. They attempt to cut to the chase, be this in an affront to decency or a civic right. 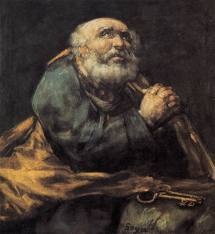 Of all the roles that the economic crisis is handing out amid the farce of Spanish politics, one of the most harmful for democracy is that of the moralists who justify the dismantling of public services as something necessary in order to put an end to waste. Instead of explaining the deep roots of the slide -the deficient structure of the European State and the strategies of speculative economics, they prefer the comforts of their atavistic sense of penance: you people must suffer now, because for years you have lived in sin and beyond your means. There are moralists who really believe it, on account of their Christian education, forged between the excesses of Mardi Gras and Lenten fasting. Other moralists are simply political strategists who sell the application of their neoliberal greed as if it meant ways of creating jobs, combatting corruption and ending waste.

The generation of this feeling of guilt has easily permeated Spain. It is not complicated to understand. Besides the hypocrisy that the political parties have maintained in light of the corruption of various of their public figures and their entourages, it is also the case that in our society’s collective memory, poverty still looms close. One does not have to be a venerable old-timer to remember scenes of misery. Spanish people around the age of fifty in their childhood and adolescence knew a humiliated country. One only has to browse the black and white or the first garish colour of collective pictures.

An image speaks to us of Sunday suits that came out on a Tuesday or a Wednesday from the wardrobes of towns to get on to a bus and travel for hours down impassable roads towards the capital. There awaited them a doctor’s surgery or the interminable queue in front of a poorly attended hatch, or the gloom of a police station, or the charity of an acquaintance with money or the abandonment of a society without rights.

Many other images speak to us, for example, of children who had not gone to school, of young people working in a house or a business for a meal and a tip, and of women with black scarves sitting on a chair, with no teeth, almost gone from life at 60 years of age. There are also images that recall the sacrifices of parents who gave up their little pleasures so that the oldest child, who had been unable to get a grant, might study at university. Images of many mouths agape when the tourists began to come, the summers of Swedish women, and when the television showed us how they lived in France or Germany. The mistreated skin of an Andalusian peasant belongs, along with dirty trains, the handkerchief of the emigrant or the swimming trunks inherited from military service, to the misery that I saw in my childhood.

Then democracy arrived. Since we lived in Europe, democracy did not just mean voting every four years. Democracy also came with local hospitals, decent roads, modern trains, attended hatches, education grants for all, adult education, travel around Spain and the world, respectful police officers, faced not cut up by the sun, decent labour contracts and uneasiness about economic and gender inequality. It never got to the European average, but it advanced a lot.

All the improvements that we came to know under democracy are now turned into waste. And the people born amid misery assume the feeling of guilt, confess their propensity to extravagance and accept the sacrifice for having thought they had the right to public services and dignity in work. The moralists of the crisis thus cut back with their scissors the dimension of the words ‘politics’ and ‘democracy’. Their meaning contains the vote, corruption, sectarianism and lies, but excluded is the possibility of dignity for the life of the citizens.